President Barack Obama promised us, all those years ago, that if only Obamacare were enacted, a family’s health plan premium would drop by $2,500 per year, and no one would lose their employer-provided health plan. Period.

These two graphs from The Wall Street Journal draw a different…picture. 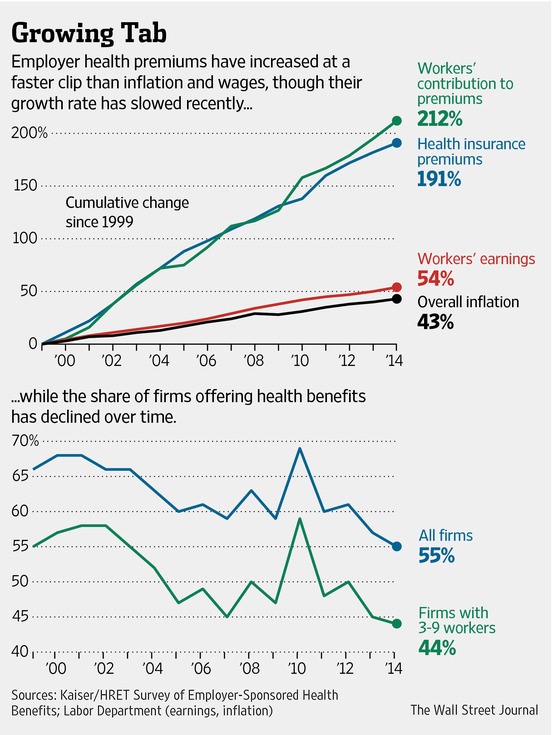 These graphs cover the period since 1999. As the upper graph shows, the premiums for employer-provided health insurance and, since Obamacare’s passage in 2010, for employer-provided health plans, have risen at a steady pace—unchanged by Obamacare, and specifically, no drop in premium cost. It’s the same with the employee’s share of those premiums; that share’s pace of increase also has been unaffected—that is, no drop in cost—from Obamacare.

Now look at the lower graph. After spiking in Obamacare’s year of enactment in 2010, the per centage of businesses offering health plans to their employees has fallen to the lowest level in the 15 years depicted.

At best, Obamacare isn’t lowering employer-covered workers’ health coverage costs. There has been, though, a sharp decrease in the number of folks even offered employer-provided plans.

(That wages have risen much more slowly than health plan premiums is a different subject.)