The Wall Street Journal offered a history lesson with empirical data relating taxes on investment to revenues collected by the government since 1977, a period when capital gains taxes were alternately raised and lowered by a capricious Congress.

This figure tells the story, which I’ll only summarize; you should read the whole lesson. 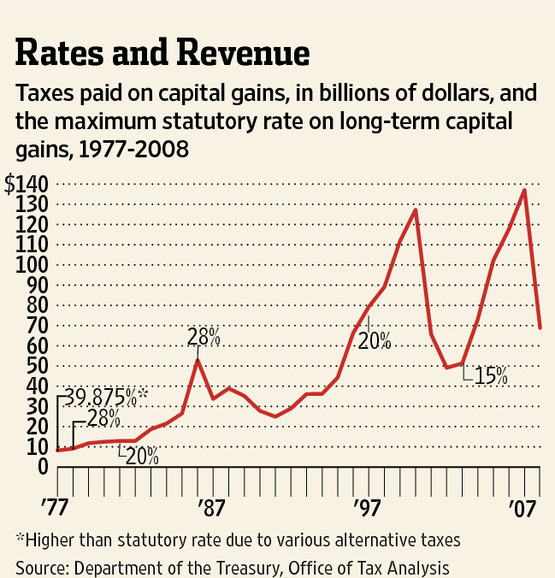 Essentially, raising tax rates—as has been noted for other Federal taxes—lowers tax revenues, and lowering the rates increases the collected revenues.

A couple of things in the figure are noteworthy, though.   The tax rate drop to 20% in 1981 did not lead to a drop in revenue—surprise—but 1982 was a year of a sharp recession, and collected revenue from that lowered rate still remained flat: no drop with the recession.  Collected revenue then ran up hard as we came out of the recession.  Additionally, the sharp drops after the sharp increases that resulted from the rate decreases in 1997 and 2003 came from the dot-com bubble burst that saw the NASDAQ, for instance, lose 60% of its value and from the Panic of 2008, whose hard recessionary effects we’re still in the middle of.

There’s another impact of higher capital gains tax rates, though, as the WSJ also points out.  High rates disinclines investors from selling their holdings as soon as they might.  This sequesters those investment monies in present investments, making them unavailable to other investments—younger, newer, more agile businesses with more current ideas, for instance—that might be better places, on a purely business basis, for investment dollars.  Moreover, the higher capital gains tax rates lower the returns on investments, leading other investors to demur from committing their funds in the first place to such investments.  The taxes distort the investment decisions.

GIBSON: So why raise [capital gains tax rates] at all, especially given the fact that 100 million people in this country own stock and would be affected?

OBAMA: Well, Charlie, what I’ve said is that I would look at raising the capital gains tax for purposes of fairness.