There has been plenty of commentary about the EPA’s regulatory excesses in various areas; I’ll not go into those.  Here are a couple of other examples of Big Government in action, though.  For our own good, of course.  And one that we desperately need that government hasn’t yet supplied.

Power Line tells about a 9th Circuit Court of Appeals ruling that rain falling onto forest roads wants tight regulation.  It turns out that when this water passes through a culvert or some such that a forester has added to the road he built for logging access, the rain becomes polluted with…something, and the culverts, says the 9th Circuit, are point sources of pollution that might contaminate that rainwater.  With 378,000 miles of roads in our national forests alone, some 400,000 permits will be required to handle that nasty rainwater (some roads have more than one culvert), and it’ll take roughly 10 years before the requisite permits can be issued (assuming that process goes smoothly) and the logging can resume.

What’s the logic for this?  Oh, wait, here it is: the housing industry’s bubble bursting caused our present economic malaise.  Bad housing.  Bad.  We’ll cut off your supply of wood.

Next, Steven Nelson of The Daily Caller reports this.  The Clean Up Government Act is going to really clear out corrupt gift giving and conflicts of interest.  For instance, a part-time state legislator who also owns a car dealership could find himself, as a result of the Act, in Federal criminal violation of the Act by voting on a highway bill.  A potential (but not certain) ethical violation—certainly that should be a Federal felony.

On the matter of gift giving, it’s currently illegal to give or accept gifts for or because of any official act.  Gifts that are given or received by public officials because of their position also are already handled by existing regulations: when the gift-giving occurs, and refusing the gift would be offensive (for instance to a foreign dignitary who made the gift), it’s received and turned over to the proper government authority.  This Act, though, would ban all such gifts.  Can’t have those exceptions.

Finally, Daily Markets offers this.  According to this table 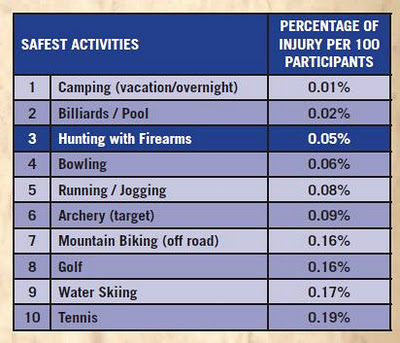 golf is three times more dangerous than hunting with firearms.  Hmm….  We have regulations that govern the conditions of ownership and transportation of firearms.  We have regulations that govern the interstate sale of long guns, or rifles.  The government even reserves to itself the definition of “sporting,” the only legal purpose for importing a firearm.  Where are the regulations governing the possession and transport of golf clubs?  How do we know that golf bag is safe, much less legal?  Where are the regulations governing the interstate sale of long clubs, those dangerous drivers and low irons?  Under what conditions might we import a golf club from Canada, or Scotland?

And tennis?  What are we to do?