It’s good to see that American stock analysts/prognosticators aren’t the only ones who are no good at the task.  This is no knock on the Spiegel Online journalist, because no one is.  Nevertheless, it’s instructive to see his remarks.

In the last 10 days, the DAX, Germany’s blue-chip stock index, has fallen by 16 percent.  On Monday it fell below the 6,000 point benchmark for the first time since January and has continued its plunge on Tuesday.  Has the crisis, which for so long seemed to leave Germany untouched, finally reached Europe’s largest economy?

…last summer, when the DAX lost 30 percent within just a few weeks, sparking a wave of politicking. The widespread belief in Germany was that only the financial markets were acting up.

That is probably the biggest problem the Germans have in the now two-year-old euro crisis.  In a sea of misery, Germany was an island of bliss.

But now, though, even its most stubborn adherents have begun realizing that this concept cannot work.

Here’s a chart similar to what this writer is looking at for the DAX, courtesy of Yahoo!Finance.  It looks at the DAX over the five days ending 5 Jun 12 (not the ten that the writer describes; however, if you follow the link, select the one month view, and look back those ten days, you’ll see the preceding five days are generally flat, so little is lost to the point). 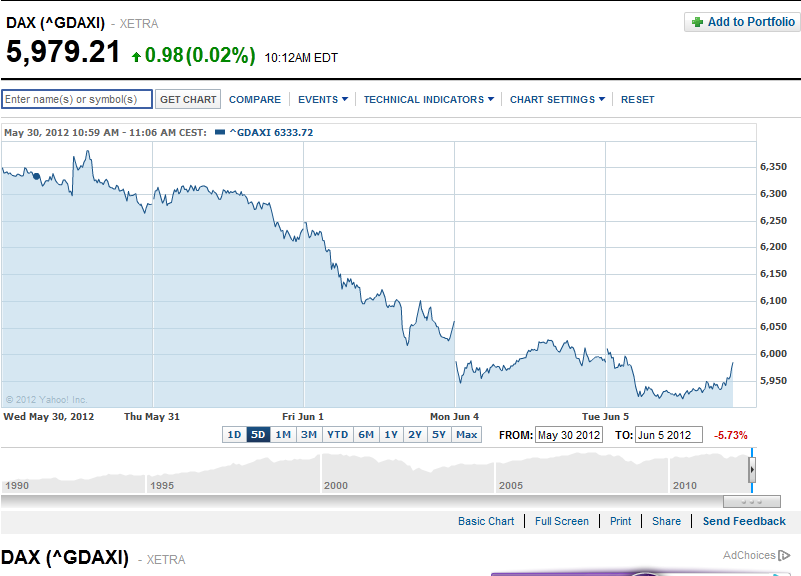 Pretty damning, isn’t it?  Nobody likes the German government’s euro, euro zone, or EU moves, and they’re trashing the German stock market over them.  Chancellor Merkel and Finance Minister Schaeuble must change their policies.

But here’s that same chart put into some sort of perspective, also courtesy of Yahoo!Finance.  This one looks at the DAX over the last five years. 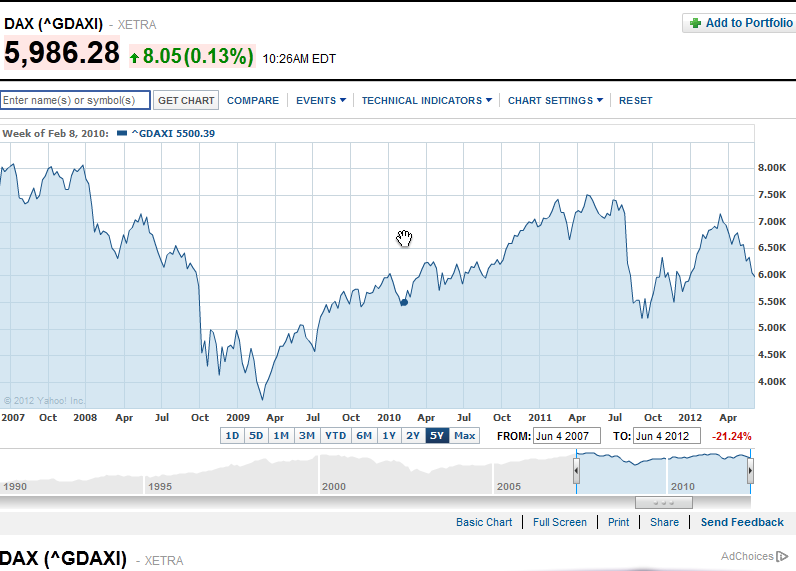 That five day period is the tiny, little down-tick on the far right end, where you almost can’t see it against the five-year backdrop.  Indeed, the whole period from the Aug-Sep 2011 period to the end is little different from the period from October-ish 2010 and that Aug-Sep 2011 other than speed of occurrence.  And both periods are trivial compared to the period surrounding the onset of the Unpleasantness of late 1999-early 2000, which had a wholly different set of “causes.”

This time it’s different, though.  Yeah.  Sure it is.