Do Federal revenues come from taxes or from economic growth?  (I’ll elide, for this post, a discussion of whether the Federal government needs the revenue it wants to collect.)  A couple of better men than me offer up some thoughts:

There is a point at which in peace times high rates of income and profits taxes destroy energy, remove the incentive to new enterprise, encourage extravagant expenditures and produce industrial stagnation with consequent unemployment and other attendant evils.

Our true choice is not between tax reduction, on the one hand, and the avoidance of large Federal deficits on the other. It is increasingly clear that no matter what party is in power, so long as our national security needs keep rising, an economy hampered by restrictive tax rates will never produce enough revenue to balance our budget just as it will never produce enough jobs or enough profits.  Surely the lesson of the last decade is that budget deficits are not caused by wild-eyed spenders but by slow economic growth and periodic recessions, and any new recession would break all deficit records.

In short, it is a paradoxical truth that tax rates are too high today and tax revenues are too low and the soundest way to raise the revenues in the long run is to cut the rates now…. The purpose of cutting taxes now is not to incur a budget deficit, but to achieve the more prosperous, expanding economy which can bring a budget surplus.

Who said these things?  Those old and venerated, in some circles, Democrats: Woodrow Wilson in the first case, in his 1919 message to Congress, and John Fitzgerald Kennedy in the second, in his 1962 speech to the Economic Club of New York.

Here’s a graph from our current Progressives’ favorite exemplar, Europe, courtesy of Dan Mitchell at the International Liberty blog: 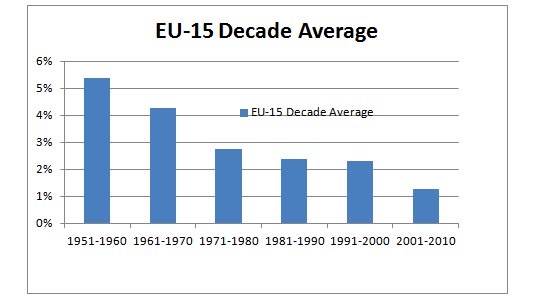 The graph shows, decade by decade, the steady reduction in economic growth of those 15 EU nations as their governments, individually, and the EU “government” generally, expanded their size and control over their nations’ economies and their citizens’ abilities to make their own decisions.

As an aside, how do we get an economy to generate revenue?  Not this way:

[L]ike the leaders of the bankrupt states of Europe, President Obama believes that the key to prosperity is to regulate, engineer, and direct the economy; to raise taxes; to augment the powers of government; to substitute collective largess for family cohesion; to spend money that does not exist…to paraphrase Macbeth, to borrow, to borrow, and to borrow.