The Hill is reporting on a new Progressive campaign, this one ostensibly to protect the freedom of political speech.  Unions and other groups, including Common Cause, Health Care for America Now, Public Citizen, and Occupy Wall Street and led by the Service Employees International Union are getting together to prevent, they say, corporate money from swaying the November elections outcomes.  As Aaron Black, of Occupy Wall Street, puts it:

If you secretly contribute and scheme to buy our elections, we’re going to come knocking on your door.  And it’s not just going to be a couple of us.  It’s going to be thousands of us.  Everywhere you turn your head.

Does this tactic sound familiar?  There’s more.  A sitting public official, the Public Advocate for the City of New York (the incumbent is first in line to succeed the city’s Mayor), Bill de Blasio, has joined the movement, and he is careful to remind us of the fate of another corporation that dared speak in the public forum: Target Corporation. Target was hit with a boycott campaign in 2010 for donating to a group that supported a Republican gubernatorial candidate in Minnesota.  De Blasio also assures us that that protest was only the start.

What happened to Target was child’s play compared to the strength that all of these organizations can bring to bear against companies that decide they’re going against the people’s will and involve themselves unduly in the political process.

The Executive Director of Health Care for America Now, Ethan Rome, insists that they’re only targeting corporations because

If you donate to a Republican-leaning, independent organization, trade association, we’re coming after you.  You donate to a Democratic-leaning one, same deal.

OpenSecrets.org lists 140 donors to political candidates and political parties; the table below lists the top 20. 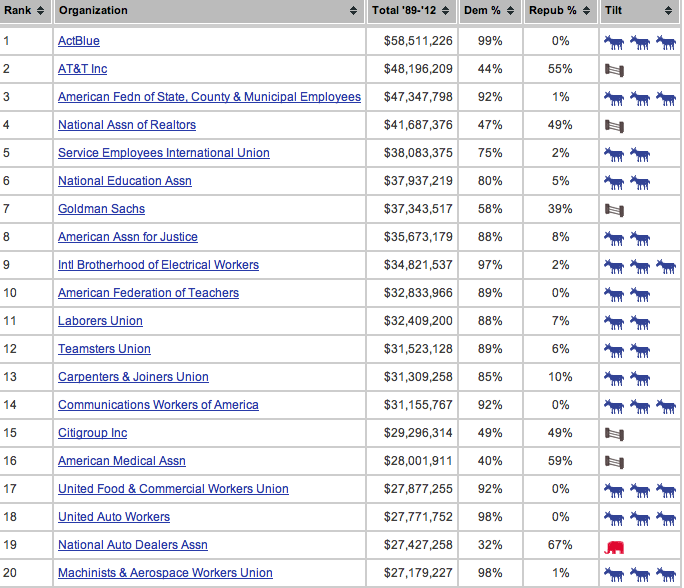 Notice two things: one group donates more to Republican causes than to Democratic ones, and 13 of the 20 groups are unions.  Weissman insists that, “You donate to a Democratic-leaning one, same deal.”  Can we really can expect a coalition led by the SEIU—the same SEIU of Montgomery County, MD, infamy—to do anything about its fellow dozen unions that donate to Democratic causes?  Or do these entities all behave correctly and so are above reproach?

Apparently free speech is free only to select groups.  Only some organizations get to play in the November elections.