I’ve written before about this subject.

The chart below is from Spiegel Online International, which has a related story, but I want to visit another aspect of this.  The chart’s breakout indicates German governmental exposure to Greek debt and that exposure’s cost to the German economy were Greece finally to default altogether on its debts. 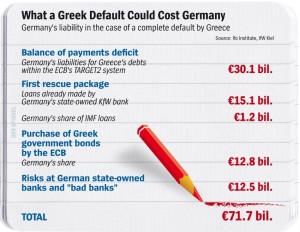 The 50%, or so, haircut currently being sort of negotiated with Greece’s commercial financial institution creditors is a real default, albeit much lipstick has been applied to this PIIG’s lips, and much makeup is being added to its face.  The breakout elides those private banks and the cost to the German economy through the private sector generally; however, the governmental institution cost breakout has its uses.

The German economy is the EU’s and the euro zone’s largest, so the figures in the chart can be taken as an outer bound, within which the other European creditor nations’ costs can be assessed.  Alternatively, and perhaps more effectively, the German cost can be proportionally bounced against the other nations’ GDPs to get an idea of the costs to them, along with an idea of how expensive those costs really are.  Since I don’t have 2011 GDP figures, yet, my greasy spoon diner napkin analysis uses 2010 GDP estimates.

Germany’s 2010 GDP was in the neighborhood of €2.7 trillion.  The chart’s seemingly enormous €72 billion bite, presented without context, shrinks when compared to German economic strength: it’s about 2 2/3% of the German GDP.  The French GDP was €2.1 trillion; its proportional “share” then works out to a bit under €56 billion.  The Netherlands’ GDP was €641 billion; its “share” would be roughly €17 billion.  And so on.  It’s true enough that stronger economies will have an easier time than weaker economies, but in the end, these are sums that are easily absorbed.

To be sure, the private sector also will take hits from a Greek default.  Taking the private sector as a whole, not just the commercial bank interests mentioned above, but including insurance company, pension firm, and mutual fund holdings of Greek debt, the total private exposure works out to around €142 billion.  That’s about half the total Greek debt; it doesn’t add much at all to the GDP-based cost.  For individual economies, the ripple effects of private sector dislocations and occasional bank bankruptcies could seem sharp, but they would be short-lived.  The economies of the non-Mediterranean EU nations (yes, including France) are simply too large and too strong to suffer permanent, or long-lasting, damage.  And the private sector is the only place the hits should occur, anyway.  There’s no reason a French, German, Dutch, and so on, taxpayer—private citizen—should pay for the profligacy of a Greek government, or for that of any government other than their own.

Certainly, it would be suboptimal for Greek’s national creditors to walk away from the deals already made for a Greek bailout: even a bad contract must be honored.  But there should be—and there need be—no more public monies committed to this effort.

The Greeks will be better off, too, for having been released from their indenture to their creditors and allowed to default and to start over.