When did they become mutually exclusive concepts?  In the Progressive meme, the downsizing of the US’ status in the world is in full force.  Because of cuts to our national security—our defense—budget driven by Progressive intransigence in cutting spending anywhere at all and their parallel intransigence in demanding increased taxes, our military capability is shrinking dramatically.  Rather than being able to fight two wars simultaneously, which we have been able to do for decades, the defense cuts will reduce us to being able only to

…fight and win one major conflict, while also being able to “spoil” a second adversary’s ambitions in another part of the world while conducting a number of other smaller operations, like providing disaster relief or enforcing a no-flight zone.

Notice that: we’ll be able to win once (maybe—war always is an iffy thing) and only hold elsewhere, hoping for a miracle there.

This is based on the idea of a superfluous military—we won the Cold War 20 years ago, for crying out loud, and if we hadn’t had this large military-industrial complex, we would never have been able to start those evil wars in Iraq or Afghanistan.  Besides, defense spending has been going up and up and up, and we need to stop it.

But here’s a graph that sheds some light on that last (I’ll not dignify the others with a response.  (a hostile Russia and China, 9/11, a nuclear Iran, Saddam’s inhuman butchery are sufficient answer.) 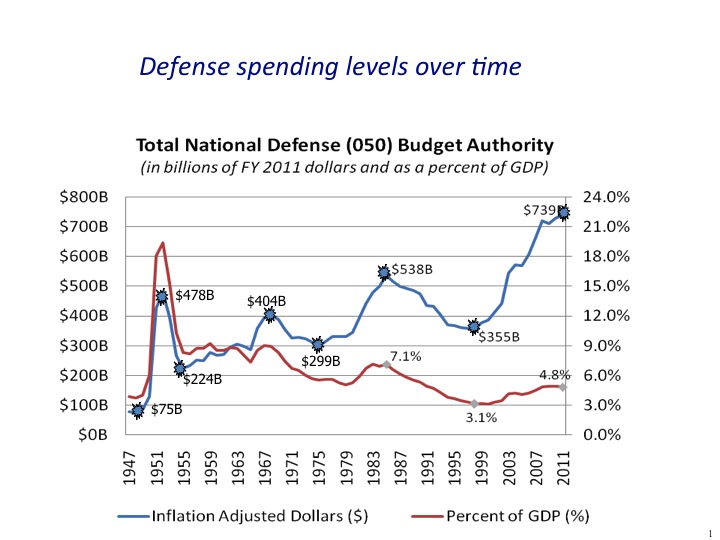 Notice that.  As a percent of GDP, defense spending has been remarkably stable.

Nevertheless, for the sake of national security, defense spending must be cut—the deficits and debts are too great and they threaten the weal and the safety of the nation.  The debt and the deficit picture certainly are as threatening as they’re made out to be, but consider: with no defense capability, where is the security?

What do we gain, though, by cutting defense?  Consider these items, courtesy of Neptunus Lex:

…shutting the doors on DoD entirely would still result in an $800 billion increase to next year’s aggregate deficit….

…radically reduce the ground forces, a couple of fighter wing equivalents and at least one or two aircraft carriers—the same forces which have allowed the US since the Cold War days to provide forward presence and deterrence.

Which is actually OK, because the Islamic Republic of Iran has just told us that the USS John C. Stennis is no longer welcome in their neck of the woods….

Well, at least one of those carriers won’t be needed, since it’s worn out its welcome in Iran as well as in DC.

One Progressive argument is that we can get away with such draconian cuts.  Even with cuts as deep as 90%, we can still wipe our attackders off the face of the earth.  But there are a couple of flaws with this argument.  The first is a moral one—and so a practical one.  With such deep cuts, we could wipe our enemies off—by going nuclear.  But with no intermediate capabilities, we’re stuck with the moral, and practical, choice of nuclear war or surrender.  There aren’t any intermediate options with such deep cuts.

The other flaw, though, goes to that ability to go nuclear.  Our nuclear weapons are aging.  They need testing and upgrade.   That takes money that’s being cut from the defense budget.  In the end, we have to ask ourselves, “what is the value of our nuclear weapons when we can’t count on them working?”  while our enemies are asking us, “Do you feel lucky, punk?  Well, do you?”

What do we gain by cutting defense rather than cutting somewhere else?   We keep three entitlement programs that are bankrupting us, and that will continue to do so, even after gutting national defense: Social Security, and Medicare, Medicaid.  But those are the programs that politicians use to buy votes with which to stay in power.

In the end, national defense and national security aren’t mutually exclusive.  Without both, we have neither.