Bloomberg is reporting that the US didn’t import any oil at all from Saudi Arabia last week, the first time in 35 years. That’s part of a longer term trend in declining Saudi oil imports over the last six years, especially. See the graph just below. 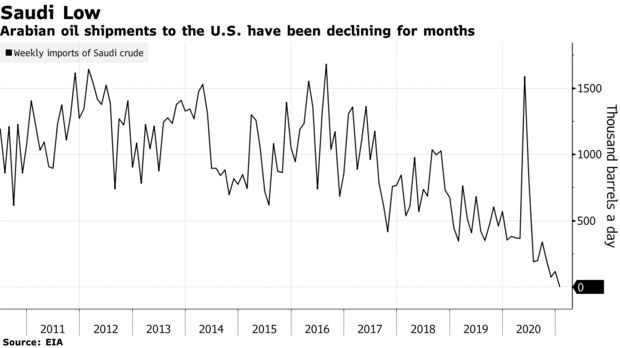 This trend is a result of the US technology advance of fracking which both drove down the cost of getting the oil (and natural gas) out of the ground and drastically increasing our own oil and gas production—virtually eliminating our dependence on foreign oil and gas and making us net exporters of both.

Watch for American energy independence to (re)degrade into energy dependence on foreign nations under the Biden administration.

Watch that dependence made doubly vulnerable as the Biden administration reduces funding for our national defense, including particularly our Navy, so that we will be less able to defend the shipping lanes carrying that foreign energy to us.

The People’s Republic of China, beginning under the Obama régime, already is in a position to shut off the shipping lanes carrying trillions of dollars of goods, including crude, to us through the South China Sea, and they’re building/acquiring naval bases for the PLA on the west coast of Africa and creating “economic” ties with island nations on the eastern boundary of the Caribbean Sea, and on the north coast of South America. And Biden’s softness toward the PLC is well-known.