Here’s a graph of Arctic sea ice growth year on year, via Watts Up With That: 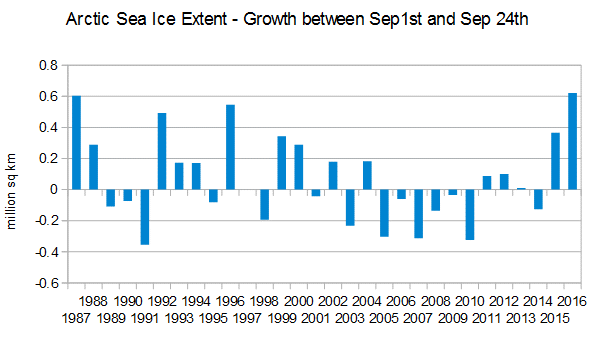 Looks to me like positive growth has vastly outstripped negative growth.  Indeed, here’s Anthony Watt’s take on the matter [emphasis in the original]:

Since hitting its earliest minimum extent since 1997, Arctic sea ice has been expanding at a phenomenal rate. Already it is greater than at the same date in 2007, 2008, 2010, 2011, 2012 and 2015. Put another way, it is the fourth highest extent in the last ten years. Even more remarkably, ice growth since the start of the month is actually the greatest on record, since daily figures started to be kept in 1987.