Zuckerberg’s minions didn’t like that, so they had USA Today “fact check” the post, and based on that “news” outlet’s review, they added this to Hinderaker’s Facebook link. 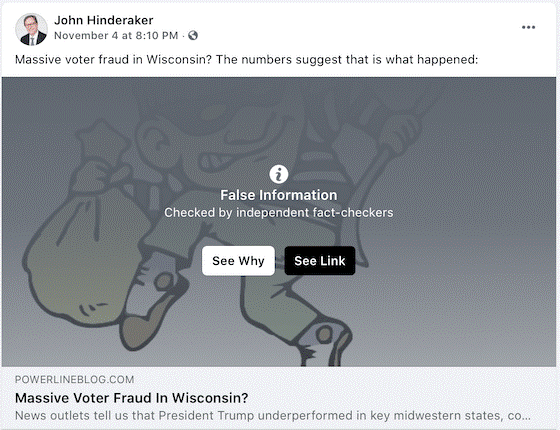 The explanation given for Facebook’s “fact check” is that “Wisconsin turnout [is] in line with past elections, didn’t jump 22%.” But my Facebook post said nothing about Wisconsin turnout jumping by 22%. Neither did my Power Line post, which I doubt anyone from USA Today or Facebook actually read. According to Wisconsin officials, that state had a record turnout in 2020, not one that was “in line with past elections,” so Facebook’s “fact check” is blatantly false. Also, obviously, it doesn’t even attempt to deal with anything I wrote in my Power Line post, which, among other things, explained why some observers have made exaggerated claims relating to Wisconsin’s 2020 turnout numbers. Nor does it try to explain why there is something wrong with what I wrote on Facebook, which was that “the numbers suggest” that there was major voter fraud in Wisconsin–a claim that, as far as I know, stands unrebutted.

Hinderaker is polite and says Zuckerberg’s (Hinderaker also says “Facebook,” but Zuckerberg is the MFWIC, not only in name, but with controlling share ownership) fact check is false. I have no such compunction: Zuckerberg, through his censors, is straight up lying.

Zuckerberg no longer runs a pipeline and so that operation no longer falls within the protections of the 1996 Communications Decency Act‘s Section 230. Here’s what Section 230 does in this context:

…protects social media platforms from liability for “any action voluntarily taken in good faith to restrict access to or availability of material that the provider or user considers to be obscene, lewd, lascivious, filthy, excessively violent, harassing, or otherwise objectionable, whether or not such material is constitutionally protected.”

It’s that “otherwise objectionable” bit that’s the problem (and so is “harassing” in this context). That’s where political speech is getting censored by Zuckerberg. From that, he’s made his operation a publisher (of opinion and, in too many cases, lies; although the latter is neither here nor there regarding Section 230), and so either his Facebook needs to be reclassified and removed from within Section 230, or Section 230 needs to be corrected to remove “otherwise objectionable” or anything like it from the liability protection clauses and the definition of “harassing” tightened a very great deal. Afterall, newspapers don’t get those protections; neither should Zuckerberg’s publisher.