The Weekly Standard‘s Jay Cost has some thoughts on the recently reported headline jobs data.  The perspective into which these headline data fit can be neatly summarized in a table and a graph.

One aspect of this perspective is the overall economic situation in which the present data sit.  This table shows that situation for the last several Presidential election years.

It’s true enough that the President Obama’s Employment growth number isn’t too different from those of past presidents in election years.  Keep in mind, though, that Obama’s number is for employment growing from an historically low employment condition: in December 2009, after a year of Obama Stimulus, unemployment was over 10%, with 15 million Americans unemployed.  Obama’s policies in 2011 have produced 0.52% annual growth against that start.  In short, we’re maintaining/growing employment very slightly at our present high unemployment rate, just as during the Clinton and Bush the Younger years, we maintained/grew employment very slightly in a time of already full employment.

Now look at those 2011 GDP and Income growth rate numbers.  They haven’t been that bad—our economy hasn’t been in such sad shape—since the Carter years.  That nearly flat employment growth rate is occurring in a terribly weak economy.

Now let’s look at the unemployment rate itself.  Cost’s graph is informative here. 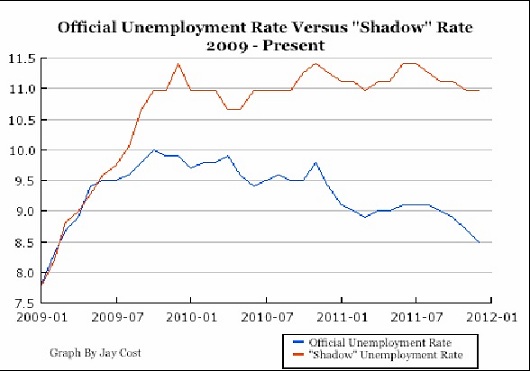 As Cost points out, much of the decline shown on the Official unemployment (but not all, to be sure) is caused by the shrinking work force, as long-term unemployed give up and stop looking for jobs.  Indeed, as Cost says

Because of the length of this jobs recession, the number of people who claim to be in the workforce is near a 30-year low, and it has dropped substantially since Obama first took office (from 65.7 percent to 64 percent).